The Box League results and fixtures can be found here.

There are both singles and doubles boxes.

Like everything else in our lives, Covid disrupted the normal timetable of the tournaments in 2020. But eventually, all the Adult tournaments were played in fine weather conditions and with the finals enjoyed by a small socially distanced crowd of supporters.
The mixed tournament was played two months later than usual over the weekend of 8/9 August. The Saturday turned out to be one of the hottest days of the summer but the 15 couples who entered carried on regardless.
As usual, there were a number of very close matches. Both of Liz Clarke and Peter Dimmock’s matches went to 3 sets and in both the 3rd set finished in a tie break at 6 games all. They managed to win them both. The first was against Neil and Alison O’Doherty and the second against Rosie & Chris Adams.
Sunday’s temperatures were much more pleasant and again there were some close and exciting matches. Rob Prewett and Ginny Higgins played a very lengthy semi-final against John Howells and Carmen Rodriguez. In the 3rd set tie break, Ginny and Rob were set point down and thought it was all over when Ginny’s shot hit the net but luckily for them, it slithered over. Rob & Ginny took the next 2 points and the match. In the final Karen Rollings and Josh Griffiths were the winners with Ginny and Rob the runners up.
The plate final also went to 3 sets. It was between Bozena and James Tytko and Alison and Neil O’Doherty. The Tytkos took the 3rd set to win. 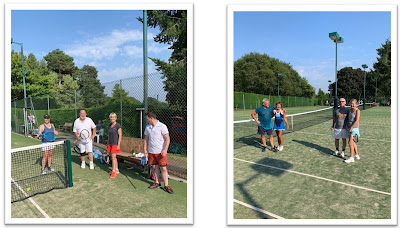 The ladies and men’s doubles tournaments were played on the 12th and 13th of September.
The first round of the ladies’ tournament had some particularly good matches. Bev Leaf and Kim Martin had a close game against Ginny Higgins and Caroline Peters with Bev & Kim winning 7-6, 6-4. The match between Joan Hollick and Michele Hall and Juliet Bucknall and Paula Brady was even closer as both sets ended up with tie breaks at 6 all. Juliet & Paula managed to win both tie breaks and the match. Rosie Adams and Lynda Thornycroft and Alison O'Doherty and Rachel Ryder had a 3 set marathon. Rosie & Lynda were well up in the third set, but Alison and Rachel hung on and finally took it 7-5.
The final was between Cheryl Mordecai and Steph Howell and Bev Leaf and Kim Martin with Cheryl and Steph winning for the second year running. Ginny Higgins and Caroline Peters were the plate winners beating Lynda and Rosie in the final. 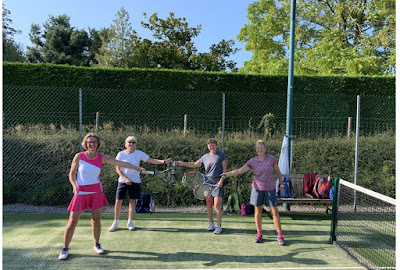 The men's tournament also produced some exciting matches. There was a needle match between Mark Thornycroft and Mo Alalami and Chris Adams and Chris Hollick with Mark and Mo winning 7.5 6.4.
The final was between Ed Hollick and Guy Adams and Neil O'Doherty and Peter Dimmock. It gave the spectators a lot of entertainment and Neil a number of bruises as the youngsters mercilessly targeted him with their smashes. The experienced pair took the first set, Guy and Ed took the second, and Neil and Peter took a close third set and the match 6-4. 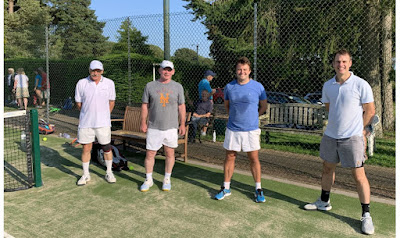 The men's plate final was between Chris Adams and Chris Hollick and Josh Griffiths and Henry Francis. Henry was very consistent and Josh provided sparks of brilliance and they won 6-4, 6-2.
The tournament unfolded over the latter half of the summer since the easing of lockdown restrictions and the subsequent upsurge in tennis playing activity was replicated by a record entry of 30 players. The preliminary rounds of the singles tournaments were played over the summer after lifting of lockdown restrictions with the finals held on Sunday 20 September.
There have been some enjoyable on-court battles over the period most notably in the semi-finals where, in the Ladies', Bev Leaf having dropped the first set to love but managed to take the next two off Ginny Higgins. At the same stage of the Men's Plate James Tytko somehow managed to keep going for 3 1/4 hours to defeat the super-fit David Richards in three sets of which the first two both went to tie breaks. The experience obviously worked for James and he came out three days later for the final in excellent form to defeat Chris Jones 6-2, 6-3. It turned out to be a good event for the Tytko family as Bozena then took the Ladies' final 7-5, 6-3 in an excellent match against Bev Leaf. The small socially distanced crowd had much good tennis to appreciate particularly the admirably high ball toss and graceful service action of both players.
The final of the Men's competition was a hard-hitting affair in which young Chris Widdicks showed a distinct lack of respect for an opponent more than twice his age by running out a 6-1, 6-2 winner against Neil O'Doherty. However, in the final of the Ladies plate, the experience of age proved an advantage. Alison Mothersdale producing a crafty selection of cuts and slices that were too much for Cheryl Blair giving her a 6-3, 6-3 victory. 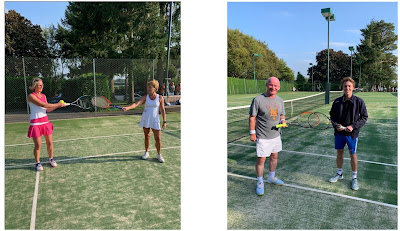 The club has an idyllic location high above the Wye Valley about four miles from Monmouth.

We have three new floodlit artificial grass courts, which are situated adjacent to Pelham Hall in Penallt.

The club is open to all members of the family and combines competitive and club tennis with social events and coaching for all ages and levels of expertise.

Currently the club has limited spaces for new members, but if you would like to register an interest in joining then please contact the membership secretary - Chris Hollick

Click on the map to enlarge or use Google Maps 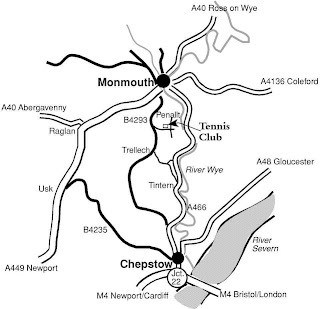